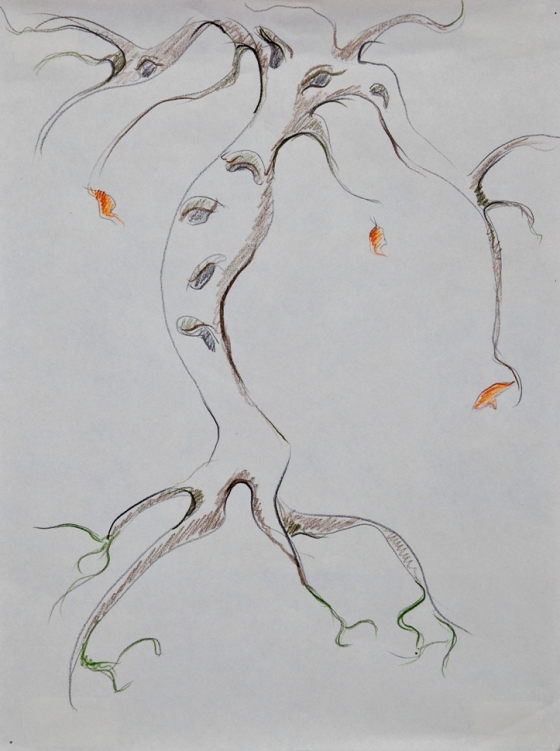 Well, the Cottonwood has just reminded me that it’s time you got to know Rolf, Alyssa’s very old friend, and the Trees.  Incidentally, there is no picture of Rolf, nor of Alyssa or any of the other humans in the stories.  The reason for this is because I hope you can see yourself in these characters, unhindered by my mental images.  So, here we go!

The tall Cottonwood that lived at the corner of DeVargas and Galisteo streets wasn’t in its place when it noticed Owl’s truck pull up to the curb—it was down by the acequia sipping water from the ice melt.  Hastily it bounded back up the hill, landing with a jolt that dislodged a small piece of bark, and settled its branches. It would never do to miss the Greeting—a simple ceremony but one that held great meaning for both the Cottonwood and Alyssa. Besides, it had something important to tell her.

Alyssa jumped out of the truck, leaving Heart to struggle with the parking meter, and ran toward her old friend.

“Tree!” she murmured affectionately, giving it a fierce hug. “How are you? Isn’t this weather great? Aren’t you glad it finally stopped snowing?  Spring’s almost here, and then you can put out your little green buds, and—” She suddenly spied the piece of bark lying near her foot and bent down to pick it up.  “Huh! What’s this? Look, Heart—there’s a funny kind of writing on it.”

Heart had reached the tree and took the slab of bark from Alyssa, examining it carefully. “You’re right, there is. Looks like hieroglyphics, doesn’t it?” She handed it back to her daughter.

“Writing with pictures. In ancient Egypt that was how they recorded all their history.”

The girl looked again at the bark, while the Cottonwood, intrigued, leaned over her shoulder. Sure enough, there were the marks, not writing exactly but more like tiny figures. Darker gray-brown against a mottled surface, there was a curving, elongated feminine form bending away from a tall straight one, and beside that a little pointed form over which floated a heavy oval that reminded Alyssa of a cloud. Then beyond that a menacing hooded shape bent toward a cowering animal, and a little apart from them, a long slender form lay prone. These “figures” could have been people or trees, except for the animal, which looked like a dog. She traced each one slowly. A little shiver raced up her spine to raise the hair on the nape of her neck, and she looked at her mother, alarmed.

“What makes you say that, dear?” Heart used to her daughter’s love of drama and tended to take most announcements lightly.

“I don’t know what, exactly. But something. I can feel it when I touch this bark.”

“Well, what something?” Heart asked patiently.

“Something…something…” Alyssa screwed her eyes shut, then remembered the River Goddess’s teaching and relaxed, letting the images dance behind them until a message emerged. “Something’s happening with the trees. But I can’t tell what. And it could happen to us, too…something bad!”

The next day when Heart asked Alyssa if she wanted to go into town she accepted eagerly.  Could she just sit by the Cottonwood and wait for Heart?

“Yes, that’ll be all right.  But don’t go anywhere else.”

The girl agreed and made herself a little nest at the foot of the cottonwood with an old blanket.  She had brought the piece of bark and carefully held it up to the empty place it had fallen from.

“See?  This is a message from me to me—from an old me to this new me.  About something called the Invisible Death and something else called the Lightning Cloud.  And there was also something about poisoned streams.  Please help me—help me remember why I wrote it.”

She held the bark in place until she felt that the tree had understood all of her message and settled back down beneath it to learn whatever she could.  Passersby saw nothing unusual in a young girl sitting cross-legged at the foot of a tree on a sunny morning, and Alyssa, eyes closed in concentration, was oblivious to them.

Now the pictures came quickly.  Herself as a Druid, a healer in her clan.  Arguments with the others.  Visions, sharp and painful, for which the others blamed her.  Halting attempts to explain the visions that failed.  Her determination to get her message across somehow, even if she should die for it.  Again the carving of images, forbidden, into the bark of a sacred tree.  Discovery by the others, and death—suffocating in a wicker basket suspended above dense clouds of smoke and licking flames.  The moment of death, and the promise.

I will come back.  I will save the trees.

When she opened her eyes, Alyssa knew what to do.  The problem would be getting the right person to believe her.  Heart and Owl’s support wasn’t enough.  There had to be proof that the tree’s message was a warning about radioactive fallout, and that the entire area was threatened, along with all its inhabitants—trees, people, animals—everything.

“Help me,” she whispered to the Cottonwood.  “You gave me back this message.  Now help me find a grown-up who will hear it.”

The tree rustled in reply.  Alyssa knew she’d been heard.  Now all she had to do was wait.  She decided to set a snare.  The same bait that had caught her attention would bring someone to help her.  She stood on tiptoe to place the piece of bark in the notch of a branch about five feet from the ground.  That should be about right, she decided, tilting her head to look up at the bark.  Only a certain kind of person would notice it, and that would be the one who could help.  She wedged it in place with a couple of small stones so the wind couldn’t blow it down.  When Heart arrived with two sandwiches and a Coke she showed her mother the bark and explained the plan.

“What a great idea!”  Heart was enthusiastic.  “It just might work, honey.  It certainly beats mine.”

“Owl’s, really—I was going to call someone at CCNS and tell them we suspect a radioactive leak into the watershed.”

“But we still need proof, Mom,” Alyssa pointed out.  “We need someone who believes us enough to go up to the trees and help us find something to bring back to show them.”

“You’ve got a point, my dear.  Let’s sit over here and watch.”  Heart picked up the blanket that had been Alyssa’s nest and moved it to a nearby bench, far enough away from the tree that it wouldn’t look like a stakeout, yet close enough that they could observe people’s reactions.  The two of them curled up on the sunny bench and munched on their sandwiches while they waited for the mysterious benefactor to appear.

It didn’t take very long.  A little past noon a young man who appeared to be in his early twenties stopped by the tree and looked intently at the bit of bark.  Heart and Alyssa held their breath.  The cottonwood stood very still, not daring to move even a single twig.

“How about that?” he whistled softly.  Alyssa liked him at once.  He lifted the bark from its niche and turned it around, trying to decipher its message.  The tree rustled slightly and the man patted its trunk as he might pat a favorite dog.

“What are you trying to tell me, old fella?”  Then he noticed Alyssa and Heart and blushed.  “Sorry,” he stammered.  “I-uh-I sometimes talk to trees.”

Alyssa giggled.  Heart smiled.  “Do they talk back?”

“Well, every now and then.”  He grinned, relaxed.  “But whatever this one has to say, I can’t figure out.  Did you see this?”  He approached them slowly, holding the piece of bark in front of him like a letter of introduction.

“I put it there,” Alyssa replied promptly, deciding to trust him.

“Because I was hoping you—or someone like you—would come along and find it.”

“But—what…?”   he squatted down on the ground in front of them, a confused frown crinkling the pleasant face.  His hair, a little like Alyssa’s own mop of curls, fell into his eyes and he tossed it back like an impatient horse.  “Why would you put a piece of bark in the notch of a tree?”

“Well, look at it,” she answered briskly.  Heart hid a smile.  Alyssa was so direct and matter-of-fact it was hard to imagine any adult holding his own in a conversation with her.  “See those marks?  Those are picture-writings.  Hieroglyphs.”  She glanced at her mother for confirmation, and Heart nodded.  “I know what they mean.”

“How do you know that’s what it says?”

“It’s not what it says, it’s what it means.  Look.  See this shape leaning over?  And the little one like a child or a baby tree?  And the tall straight one?”  He nodded, and she went on.  “And see the scary thing beside the little dog shape?  And the dead-looking one on the ground?”  He nodded again.  “Well, those are trees—and people—except  for the dog and the scary thing—that’s Death.  They’re being hurt and killed by the Invisible Death and the Lightning Cloud.”

He sat back on his haunches, gazing into her round blue eyes.

“That’s a pretty detailed story for a few marks on a piece of bark,” he observed mildly.

“I’m not saying I don’t believe you.  It makes plenty of sense to me.  I’m just wondering how you came by it.”

Alyssa gave him a careful, measuring look.  He seemed like the kind of person who wouldn’t lie to you—someone you couldn’t lie to, either.   Medium height.  Reddish brown hair that just reached the top of his shoulders.  Dark blue eyes in a tanned face, and a firm, straight mouth.  He had on jeans and a light jacket over a plaid flannel shirt—the kind Owl liked to call the “Eddie Bauer special.”  His hands were large, with squared-off nails and little scars on them.  He smiled ruefully when he caught her staring at them.

“Cats.  I have four of  ‘em, and they play kind of rough sometimes.”

That did it, she decided.  This was the one.

“I know what the message means because I’m the one who wrote it.”

One Response to “Old Friends…”