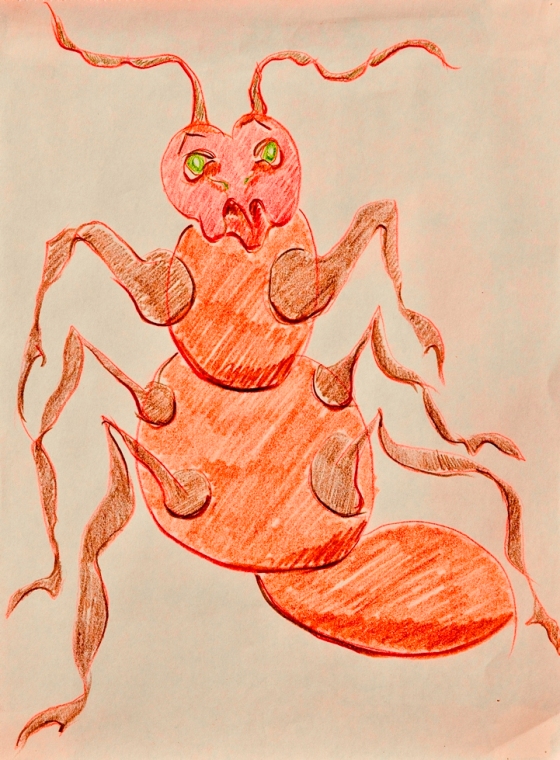 The River Goddess is back!

One of the main characters in The River Goddess & Other Stories is Number Two, a large red ant who acts as the voice of reason (sometimes ad nauseum!) in most of Alyssa’s adventures.  Kind of like C3PO in Starfriends.  I have a special spot in my heart for ants– there are a couple of reasons for that.  One is based on a Hopi tale about how the ants saved humans in the Third World.

Great Spirit was very displeased with the People.  They had not been behaving properly.  In fact, they’d been very bad, some of them– stealing each others’ possessions, sleeping with each others’ wives, even killing each other!  Great Spirit decided a cleansing was needed and that a huge flood would do the trick nicely.  However, He also knew that there were a few good people and those folks should be saved, so He sent a message with Eagle to one of the good people that a plan should be made to save those who were worth saving.  Well, this Good Man knew something had to be done but he didn’t know what.  He was sitting despondently by an ant hill one hot afternoon on First Mesa when a large Red Ant emerged and asked him what was wrong.

“Great Spirit is going to send a flood to cleanse the Earth of all the bad people,” the Good Man replied.  “Problem is, some of the People are good, not bad, and He wants me to figure out how to save them.  But I don’t have the slightest idea what to do.”

“Hmm…” said the Red Ant.  “Let me think for a minute.”  And he crouched down to think.  Suddenly he sprang up on all six of his legs and shouted, “I have it!  You bring the good people here and we ants will help you survive.  Don’t worry any more about it.  Just go round them all up and bring them here as fast as you can.”

So the Good Man hurried away to gather the people to be saved.  After two days he had them all together and led them to the ant hill.  The big Red Ant stuck his head out of the hole at the top and counted them.

“Not too many,” he muttered.  “Now all you good people, follow me down this hole here.  You can live underground with us.  We’ll seal the hole at the top when you’re all inside and no water can get in.  When the flood waters recede, you can come out again and get back to the business of living your good life.”

So all the good people, with the Good Man leading them, followed the Red Ant down into his underground home.  There they were welcomed by all the other ants, fed grain and other tasty foods, and treated like brothers.

The rains promptly began (Great Spirit must have been watching!) and the flood waters rose until they covered the entire Earth.  All the bad people drowned, and soon there was nothing but water everywhere.

Meanwhile, down below, food was getting a bit scarce for the ants and all the good people.  Several of the ants went to the big Red Ant and asked him, “What shall we do?  There’s not enough food for all of us and the good people, and the waters haven’t gone down yet.”

The Red Ant thought for a little while and then he called the ants together and said, “Here’s what we’re going to do.  We certainly can’t starve our guests– that’s not right.  So each of us ants will tie a cord around our middles.  Then we’ll pull it as tight as we can.  That way we won’t feel so hungry and there will be enough food to last us and the good people until the waters have receded and the land is dry again.”

This is exactly what the ants did.  And to this day, you can still see how those cords around their middles made their stomachs so small that there was enough food for all.  Because of this, Indian people respect and honor the Ant for its generosity and kindness and most of them avoid killing ants.

In Alyssa’s world, where animals talk to her (and to any other humans who happen to be listening), taking the advice of a big Red Ant makes sense.  Ants are very practical, very community-oriented, and full of interesting ideas– as you’ll see when you read “The Ants’ Treasure”  in The River Goddess & Other Stories !

One Response to “About Ants…”